Following the vote to leave the European Union, cast in 2016, there has been endless speculation about the future global standing of the United Kingdom. Many naysayers agreeing London is to be hard-hit by the economic fallout.

Of course, change is unavoidable. There will be an adjustment period and London will need to gather resilience. But, as new research suggests, we needn’t fret too forcefully. It is proposed the capital will continue to attract the interest of investors the world over.

To prove London is prospering, Savoy Stewart analysed Knight Frank’s The London Report 2019 to find out how the capital has been affected since the vote on Brexit and which global powerhouses are choosing to continue to invest in the city. Pleasingly, the findings give good indication that, post-Brexit, we will continue to thrive.

In the research, we found London saw greater volumes of commercial property investment than any other global city in 2018, with transactions worth over £16 billion. In terms of office space in London, 14.8 million sq. ft. was let in the capital in 2018, the highest level since 2014 and 15% above the long-term average.

London’s workforce has remained buoyant too. Per the Office for National Statistics (ONS), in the last two years, the capital’s workforce has grown by 278,000 jobs on a net basis. 26% of these new roles can be found in the information and communication sector, while close to 6,000 jobs have been created in the financial sector since the vote on Brexit. Gladly disproving some concern over job loss and office relocation.

In terms of investment properties, over 80% were driven by overseas purchasers in 2018. This highlights how important foreign capital remains to the UK. But who is investing? 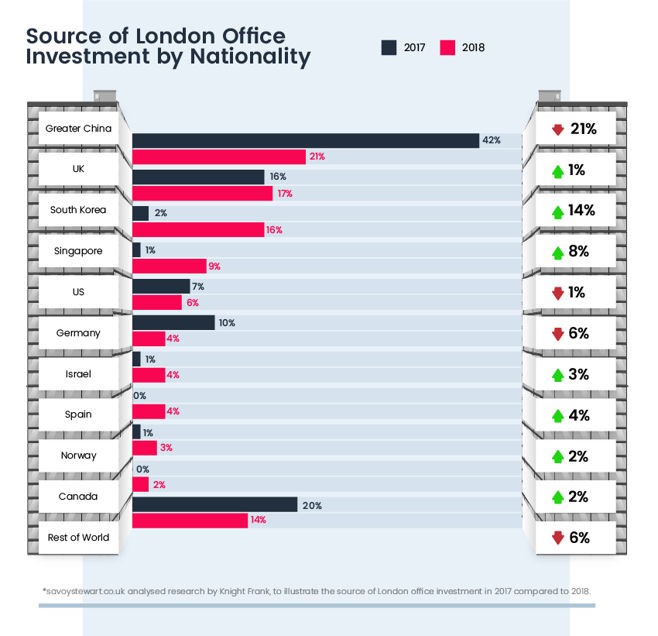 By comparing London office investment in 2017 to 2018, it’s possible to forecast what global partners the UK should nurture moving forward in 2019.

Greater China held the highest source of London office investment in 2017, at 42%. Homegrown investment followed (UK; 16%), while healthy acquisition from Germany (10%) and the US (7%) bolstered the market further.

Flash forward to 2018 and things were decidedly different. London office investment in Greater China dropped by half, shifting the total to 21%. Although capital controls imposed on outbound investment in this region might be responsible for the variation.

Nevertheless, though investment in Greater China, Germany and the US has fallen, interest in the London office market has risen in South Korea, Singapore, Israel and Spain. Signifying in 2019, interest will stem from the far east, amidst cautious observation and renewed interest from Europe.

“London is the hub of debate amid Brexit. There is a lot of expectation regarding its future power as our capital and, in turn, our future power as a country. But we shouldn’t get caught up in what we don’t know; the what ifs and the maybes.

We should focus on what we do know; the facts and figures. In the two-and-a-half years since the vote, we have maintained healthy investment and a healthy workforce.

It is really encouraging to see that, despite some pitfalls and perhaps a slowed pace, interest in London office investment is burning through, with notable interest from South Korea, Singapore and Israel. A real melting pot of possibility.

The way we do business is changing, and it is certain to change further, but it is not ending. We will continue to thrive, but in a different way.”